Wow, its been a while and back on India's Independence Day eve to restart our blogging.

As India celebrates its 69th independence day tomorrow (15th Aug), some of its sportsmen have either achieved or are on the threshold of glory for their country.

#PankajAdvani was crowned World Champion in Billiards yet again just a few days ago.
What a champion and at such a young age, he's already an all time great in the game competing with Mike Russell and Geet Sethi as the greatest player ever.

#PSindhu and #SainaNehwal have reached quarterfinals of the world badminton championships in Malaysia. While Sania has never crossed this stage in 5 attempts before, Sindhu seems to be the more likely to advance to finals given her form and fitness. #JwalaGutta and #AshwiniPonappa have created history at the same event qualifying for quarters in the Women's Doubles event.

The Indian Men's #Hockey team beat Spain to win series in Europe. Spain are real tough nut to crack so this win will definitely spur the much controversy plagued team to greater heights. If only the IHF manages this team and its politics, the golden days of Indian hockey (8 Olympic gold medals, the highest by any team in a particular event at the Olympics!) can be re-dreamt of!

The #ProKabaddi fever is gripping the nation and its wonderful to see traditional sports getting so much coverage and support from media and businesses alike. This would do India a world of good..

#SaniaMirza has been nominated for the prestigious #KhelRatna award (the highest sportsman award in the country) for becoming the first woman to win a tennis grand slam at Wimbledon last month.

And last but not the least ... the much maligned Indian #Cricket team is battling it out against Sri Lanka in a three test series under new captain, Virat Kohli, and the young side will look to win this series to gain confidence going into a long and tough season ahead....

All in all ... sports moving ahead in the right direction for India
Jai Hind...

Wish all Indian viewers all over the world a Very Happy Independence Day! 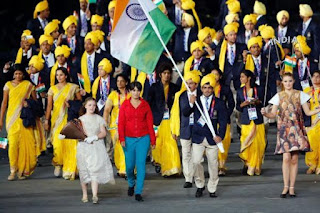 Contributed By: Amod Inamdar at 19:40