The Australian Open ‪#‎Tennis‬ ‪#‎Grand‬ ‪#‎Slam‬ tournament gets underway n Melbourne, Australia.
Novak Djokovic vying to complete the GRAND SLAM (all four majors in a row) and dont see anyone stopping him considering his form and class! There is clear daylight between him and the others at the moment. Note that, he had won French, Wimbledon and US Open (bt Federer at the Championships and Flushing meadows) and is looking ominous to go the distance here at the Rod Laver Arena at Melbourne Park.
Roger Federer will probably on tour for the last time in his glittering career, trying to add to his 17 Grand Slam titles. Can he add one more? Rafa Nadal is on his way back but loads of injuries and back problems have hampered him for well over an year now. He looks a shadow of his golden prime from 2-3 years ago. Andy Murray looks out of sorts. So, the men's draw seems to petering out into a Djoker vs Fed/Nadal/Murray final.
Serena Williams seems to be hot favorite to win this SLAM in women's draw. While the Russians are always competitive, Serena looks a class apart and will look to go past Steffi Graf's 22 Grand slams.
In women's doubles, Sania Mirza and Martina Hingis will look to extend their unbelievable run of successes from 2015. Unbeaten since Wimbledon 2015, they are the golden pair to watch out and grab their third straight GRAND SLAM crown.
In men's doubles, the Bryan Brothers will look to win this slam easily unless there is some big upset or likes of Leander Paes, Daniel Nestor, Andy Ram pull out something sensational.
All in all, looks like an interesting couple of weeks of action at the first grand slam of the year!
Powered by:
http://www.whowillwinthecup.com 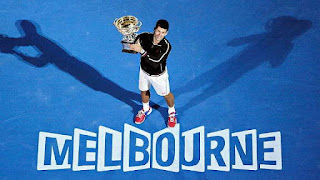 Contributed By: Amod Inamdar at 16:50