An absolute superlative batting performance from Virat Kohli ensured India beating Australia's challenging total of 160 to book a semi-final berth at ‪#‎WT20‬. It was almost surreal batting from Virat after India were rocked earlier and struggling at 50 for 3 in 8 overs.
Firstly, along with Yuvraj he steadied things before Yuvraj sprained his ankle and got out soon after. Once MS Dhoni joined him, they started pushing the Aussie fielders and ran wonderfully between the wickets to get the target in sight.
However it was still daunting to score 39 in 3 overs.
This is when Virat unleashed his astonishing mental and batting skills to cruise through to the target. He first smashed 19 runs off Faulkner's 18th over and then 16 in Coulter-Nile's 19th over to set up just 4 in the final over. Dhoni finished the game in his customary smash over midwicket for a boundary.
Stunning win for Indian Cricket Team
They will now play West Indies in the second semifinal of #WT20 at Wankhede Stadium in Mumbai. NZ play England in the first semis at Kotla, New Delhi. 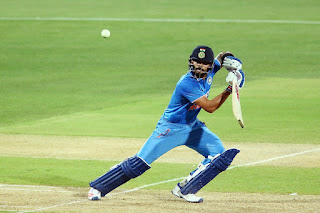 Contributed By: Amod Inamdar at 00:11