Two Great Matches One Classic While One Houdini Escape

The Championships of 2015 have produced some exciting tennis and results over the last 10 days. Seeds have tumbled, stumbled and mumbled along the way. However, two matches have caught imagination of the crowd and media alike. Both stunners ... one an absolute classic and the other one a lesson in resolute stubbornness!

The Classic
Without doubt, the greatest tennis match at this year's ‪#‎Championships‬ by a distance and we dare say this could go down as an all time classic too! Unfancied Heather Watson pushed top seed and World No.1 Serena Williams to the limit in their Round 3 match at Wimbledon.

After an easy first set to Serena, the match looked dead and buried for Heather. But the second set saw a major turnaround as she started stroking the ball beautifully, chasing every ball down and catching Serena completely off guard. She broke Serena and tied the score at 1 set apiece.
The decider began in favor of Heather again. She raced to a 3-0 lead and Serena for once didn't look like a multiple grand slam champion - tired, frustrated and clueless! But the true champion that she is, she hung on and brought all her experience into play breaking Heather in the next game and the next and tying at 3-3. Momentum shifting towards the champion.
Heather managed to hold her next game and then broke Serena yet again to go 5-4 up! Serving for the match, she needed nerves and temperament to put it past the top player but class of Serena showed as she broke her back and tied things and served beautifully to surge ahead 6-5.
Serving to stay in the match, Heather gave her absolute everything but Serena's overall ability and champion skill broke through her resilience and won an incredible match (Serena admitted this being one of the toughest matches of her career) 6-2, 4-6, 7-5 in over 2 hours of breathtaking tennis from the youngster challenging the champ.
Everyone in the crowd was supporting Heather and Serena was feeling that heat throughout. She had words for the chair umpire about crowd behavior distracting her during play.
Nevertheless, Heather will be the talk of tennis for years to come owing to this performance. Well done Heather and she'll definitely come back stronger in other tournaments. Serena marches on to her dream of the calendar grand slam! 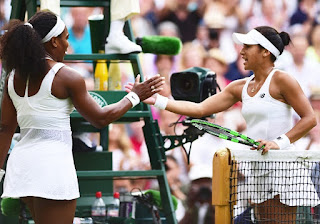 The Houdini Escape
If the women produced a gem, the men weren't to be left behind.
Top seed and World No 1, #NovakDjokovic faced super serving #KevinAnderson (South Africa) seeded 13th in a 4th round match.
Anderson started brilliantly. Much faster, supple and with intent. Although no serves were broken in the first set, Kevin looked stronger and deservedly won the tie breaker to go 1-0 up. Nothing to worry for Novak since he's master of long matches.
The second set began on the same note. Anderson breaking Novak and raced to a lead but Djoker caught up with him at the right time to force another tie-breaker. Once again, it was Anderson who looked better and he went 2-0 up. He was certainly welcoming thoughts of a great upset at Wimbledon. The crowd once again rallying behind the underdog.
But, champions are champions and it showed. Djokovic came out blazing in the third set to demolish Kevin 6-1. This shook up Anderson badly and the Serb No.1 was in his usual backs to wall recovery mode. He demonstrated similar clinical display in the fourth set to tie the match at 2-2.
Kevin was certainly out of it by the time fifth set began. The momentum and ability was with Novak and he kept powering his way through. Kevin hung on though before bad light forced play to stop.
When play resumed the next day, Kevin was hoping a change of momentum but Djokovic had nothing to with it. He powered and won the fifth set 7-5 to clinch a place in the quarterfinals.
Final score
Djokovic bt Anderson 6-7, 6-7, 6-1, 6-4, 7-5
A typical Houdini escape by Djoker!
Wonderful play from Kevin Anderson and he must have been dejected after being 2-0 up in the match. But, the masterclass he received from World No. 1 should stand him in good stead as he moves his way up in the rankings and future tournaments.

2 great games of tennis.
Tennis, the winner all the way! 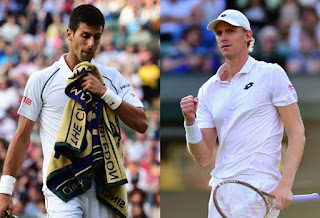 Contributed By: Amod Inamdar at 18:10