This year's Australian Open Tennis championship has been nothing short of awe inspiring display of tennis for the old guard. The legends of "yesterday" as they were labeled, just rose to the occasion and showed why they are legends in the first place!

In the Men's Singles draw, arguably the greatest rivalry after Borg and McEnroe, #RogerFederer and #RafaelNadal stormed into the finals with classic 5 set victories over their higher ranked and younger aged opponents showing their class and stamina alike to play at this level. What a dream final this would be! #Rafa has a big edge over #Roger in Head-to-Head comparison and also Grand Slam meetings so he will feel the upperhand going into the contest. But those wins were way back in 2009-2011. Their latest meeting in 2015 saw Roger turn the tide on Nadal and pull one back (although not in a grand slam event).

We as tennis fans can only hope to see a classic on Sunday (remember some of those epic battles ; the 2007 and 2008 Wimbledon Finals, 2011 Australian Open final to name just a few...) Who are you supporting to win? Federer his 18th or Nadal his 15th? Only time will tell.

In the Women's Singles draw, the #Williams #Sisters have brought back memories of their rivalry down the years yet again. #Serena has always been on top of her game over the last few years but #Venus has been the surprise package this year. And she promises to challenge Serena's supremacy in Women's Tennis. Also, Serena's Grand Slam finals record over the last few tournaments has been surprisingly poor. She has lost 3 finals (surprisingly to low ranked newbies) so she needs to put that behind her. Venus can go all out with nothing to lose. The pressure will be on Serena as she stands on threshold of surpassing #SteffiGraf (22 Grand Slam crowns).

Whatever the outcome, we are going to see two classic matches from the legends of the game.  Lets just savor the moments.

Australian Open 2017: Fan Cam Is The Latest Buzz At The Grand Slam

#FanCam - The latest sensation unveiled at the #AustralianOpen #Tennis #GrandSlam.

A STATE-of-the-art "Fan Cam'' to be unveiled at this month's Australian Open will allow spectators to take control of a camera inside the #Stadium #Roof and snap a #Selfie'' in their seats.

Fans will be able to visit a mobile site via smartphone, enter their seat number and pose for a picture in the latest grand slam first at #RodLaver #Arena.

Photos will then be sent to their phone and fans would be encouraged to share them on digital walls inside the stadium and social media with prizes awarded after matches for best images of the night.

The Fan Cam is just one example of cutting-edge technology being used at this year's Australian Open.

More than 200 moving lights will be installed around the arena catwalk and at the top of stadium aisles, and music composed by acclaimed Australian producer Ned Beckley will play from stadium speakers. A light beam display will fill the arena each evening.

And more than 200 different videos tailored to player match-ups every night will be played on 3m high digital screens around the venue.

Powered by:
http://www.whowillwinthecup.com
Contributed By: Amod Inamdar at 21:47 1 comment:

It was a day of centuries at the #Barabati #Stadium in #Cuttack, the venue for 2nd ODI between #India and #England. Trailing 0-1, English captain #EoinMorgan chose to chase on this super flat deck and also assuming that dew in evening would support their batsmen when chasing the total.

Early breakthroughs for #ChrisWoakes, including the prized scalp of talisman #VirakKohli put India on the backfoot early. Woakes snared Rahul, Virat and Dhavan in quick succession to send India reeling at 25 for 3.

In walked #MSDhoni to join #YuvrajSingh. It needed a partnership to not just bail India out of trouble but set a score where they could challenge the English batters. As it turned out, a dream partnership of sublime timing (Yuvraj - 150) and masterly timed innings (Dhoni - 134*) to guide India. They put on a stunning 256 run partnership (5th highest for any wicket in #ODIs). Both scoring majestic centuries in the bargain. By the time Yuvraj left, they had set up a great platform for the young bashers in Jadhav and Pandya to take centrestage.

With the insurance of Dhoni at the other end both didnt disappoint. Jadhav and Pandya slogged their way to get India to a massive 381 for 8 in 50 overs. MS remained unbeaten on 134.

The chase needed a similar response from English batsmen. However, #AlexHales nicked one Dhoni to get England to a worst possible start. Mr. Dependable #JoeRoot then joined #JasonRoy and both decided to take the attack to the Indians. Together they strung a century partnership.

Just when things began to look brighter , a change of bowling worked for Kohli.
#RAshwin,  after a poor game in Pune, bounced back to get Root. His flight and the wicket did him in. He lofted one straight to midwicket where skipper Kohli completed his catch.

#Morgan then stepped in and started accumulating runs. #JasonRoy kept smashing at the other end and propelled the innings with a wonderful 83 before he was castled by #Jaddu, #Moeen made a quickfire 50 and at 203 for 4 in 30 overs, the target seemed achievable. It was 20-20 scenario.

A couple of quick blows though set England back. Ashwin foxed dangerous #BenStokes and then tricked #JosButtler in quick succession to put pressure on England. #Morgan continued his fine strokeplay though and kept the asking rate within grasp. At 349 for 7, needing 33 in 18 balls, the game looked even and slightly tilted towards England since Morgan was in superb touch.

Then tragedy struck. Bumrah's yorker was somehow dug by Plunkett but straight back to him. By that time, Morgan had followed up too long and way out of his crease. Bumrah ran him out comfortably to release a lot of tension in the India camp. The final couple of overs saw England fizzle out and ended 15 runs short of the target. What a pity! They were in it for most of the game and it would have been an all time classic run-chase if they had pulled this off!

Man of the Match: Yuvraj Singh 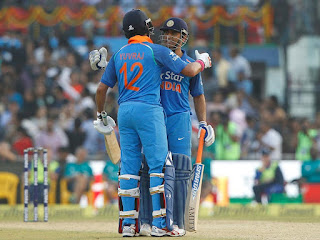