Arguably the most popular #T20 #Tournament in the world, the #IPL started in 2007 after India's unprecedented success in the 2007 T20 World Cup, when they lifted the trophy in South Africa.

The IPL started with a bang when #BrendonMcCullum, then playing for the Kolkata Knight Riders (#KKR) scored a massive 158 against the Royal Challengers Bangalore (#RCB). The #VijayMallya owned team had performed poorly in the first season and came 2nd last on the number's table. The team was criticised for a poor selection of players, which consisted of test specialists like Rahul Dravid, Wasim Jafar and Jaques Kallis.

The team has come a long way since then and has remained a top contender for the title, despite never having won the tournament in its decade-long history. Led by Indian Captain #ViratKohli, the #RCB displays a mixture of youth and experience but remains heavily dependent on its famous #BattingLineup.

Virat Kohli
He might have hit a rough patch in the ongoing Border-Gavaskar series but T20 is a different ball game altogether and Kohli;s track record in the format speaks for itself.

Chris Gayle
The big #Jamaican is easily the most experienced batsman in the team and the most destructive one, on his day. #Gayle has been playing as a mercenary in #T20 tournaments all over the world and is easily a nightmare for any #Bowler at the top of the order. He has 3220 runs in the 82 matches that he has played in the #IPL, with an average of 46 and a strike rate of 156.92 and a top score of 175 against Pune. He also happens to have the fastest T20 #Century to his name.

AB de Villiers
AB de Villiers is #Superman. #ABD Villiers is at a stage of human evolution where he has left the homo sapiens way behind. De Villiers can captain, can bat anywhere, keep wickets, field anywhere, and even bowl at a decent speed. While it is to be seen, if #Kohli and management use him as a finisher or up the order, De Villiers will find ways to score on anyone, anywhere on the field.

Tymal Mills
The Englishman is the newest buy in the team and this is first IPL season. At 24 years of age, Mills has a bright future ahead of him and playing for RCB in the IPL could only propel him to new heights of stardom. Mills is the only pacer in the team who comes with some reputation. Considering the batting line-up, it is very unlikely that he would be short of runs to defend but his skills with the back of the hand slow ball mixed well with his ability to fire #Yorkers at will could be the last piece of the puzzle #RCB need to win the #IPL. 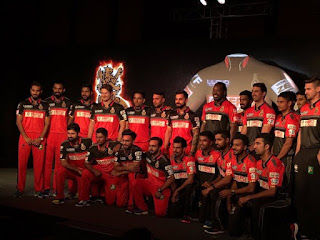 Contributed By: Amod Inamdar at 17:30