Mumbai Indians and Rising Pune Supergiant will meet in the Indian Premier League final on Sunday, less than a week after the two sides faced off in the first qualifier, which Pune won. Supergiant cruised to a routine 20-run win in that match, but Mumbai's bowlers appear to have discovered their form since, holding Kolkata Knight Riders to just 107 runs in Friday's second qualifier.

The match will be played at Rajiv Gandhi Stadium in Hyderabad.
RPS lead Mumbai 3-0 this season (2 league wins and win in Qualifier 1) and will look to keep their grip hold. MI on the otherhand would like to show who is the real boss? owing to their allround ability and better team strength.

Mumbai's bowlers redeemed themselves in a big way on Friday after their disappointing showing in the first qualifier, bowling out Kolkata in fewer than 19 overs on their way to a fine win. Karn Sharma led the way with four wickets, and he finished with some remarkable numbers overall.

He wasn't the only one who impressed, with Jasprit Bumrah, Mitchell Johnson and Lasith Malinga all living up to their hefty expectations. It was the kind of spectacular bowling performance the Indians needed, and a far cry from Tuesday's poor showing.

In their last meeting, Pune had two players score half-centuries (Ajinkya Rahane and Manoj Tiwary), while MS Dhoni added an unbeaten 40. Supergiant were extremely aggressive, but the tactic ultimately paid off. It didn't hurt that Mumbai's top order stumbled, with only Parthiv Patel scoring at a fair rate. Rohit Sharma was kept very quiet, and that's unlikely to happen again.

The absence of both Ben Stokes and Imran Tahir didn't seem to bother Pune all that much in their last match, but their experience could have been crucial in a final. If there's one thing Mumbai aren't shy of, it's just that―experience.


Expect Mumbai's top stars―Sharma, Kieron Pollard and Lendl Simmons―to flash their big-match potential on their way to halting Pune's win streak over Indians. It will be close, but Mumbai are billed win the IPL title on Sunday unless the wily old fox - MS Dhoni and Steve Smith have some tricks in their bag! 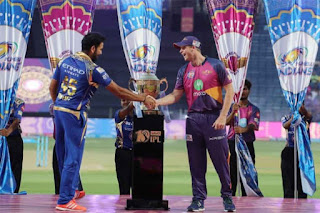 Contributed By: Amod Inamdar at 15:39