Rising Pune had won all the three meetings between the teams this year.
But, Mumbai Indians defeated Rising Pune Supergiant in the 10th edition of Indian Premier League on Sunday to lift their third IPL trophy. Having zipped past nearly all other teams, MI had not been able to defeat RPS.

At various times, skipper Smith, the talismanic MS Dhoni, Manoj Tiwary and even a largely off-colour Ajinkya Rahane had inspired the team to victory. This was one of the closely contested IPL Finals till date.

In a match that went right down to the last ball, Mumbai registered a one-run victory in the packed Rajiv Gandhi International stadium in Hyderabad. MI began favourites in this title clash - for they had good balance and several match-winners in their ranks. If it was not for the brilliance of Krunal Pandya (47), the "blues" would have found it hard to cross 120 and provide some resistance to their nemesis this season. Mumbai were reeling at 79-7 but Krunal Pandya topscored for them with a belligerent 47 before falling to the final delivery of the innings.

MI again tormented Dhoni and Fleming in an IPL final yet again. In four previous final losses in CSK colours, two of those had come against the Mumbai Indians. 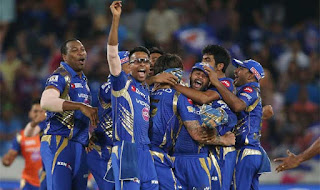 Contributed By: Amod Inamdar at 23:55