Did Mitchell Starc do a Twitter goof-up by messaging the wrong Virat Kohli? - Yahoo Cricket (blog)

Things are definitely not going well for #Australian #Pacer #MitchellStarc. After getting sidelined from the #India-Australia #TestSeries midway due to stress #Fracture on his right knee, he has now landed in an embarrassing situation.

#Starc, with hopes of settling down the air with India and RCB skipper #ViratKohli, sent him a personal message on #Twitter. The message was a lighthearted one with congratulatory words on the Test series win against Australia and also the emphatic home season India had against New Zealand, England and Bangladesh which helped Kohli and his men to climb the No. 1 spot in #ICC #Test #Rankings. Moreover, Starc also wished Kohli to have a #Speedy #Recovery from a shoulder #Injury which the swashbuckling batsman sustained in Bangalore Test keeping him out of the final Test of the series at Dharamsala.

There was nothing wrong with Starc's message. But the only, and perhaps the biggest, problem was that Starc sent it to a parody account of Kohli. Starc, who is dart on target when it comes to bowling absolute yorkers to batsmen on field, went haywire on Twitter by messaging the fan account @imVkohIIi rather than Kohli's official handle @imVkohli.

"Hey friend Hopefully I don't have to look for a new IPL team?? Haha media hey! Didn't get a chance to have a proper catch up mate but Congrats on the series win and on your summer personally… I hope that shoulder is on the mend and not too bad? Good luck for the IPL, here's hoping to an RCB win. Cheers mate," Starc tweeted. Now obviously, the owner of the account could not resist this glaring opportunity and swiftly shared this message to display the great blunder Starc did. Not only did he share the message but being a good bloke replied Starc with humbleness and made the speedster aware of what blunder he had committed.

The owner replied (ignore the glaring English), "Thanx for all these on Virat's behalf. Hoping your injury is well nowe & wishing good luck for all ur upcoming matches. As we all know that u & virat r good frnds on & off the field as many times virat had mention it. As i m fan of @imVkohli & hoping u both to playing together for RCB next year. Lets cheer together for RCB & hope to…"

Starc has played under Kohli's captaincy for RCB in 2014 and 2015, but opted out of IPL 2017 with intentions of being fully fit for the upcoming ICC Champions Trophy 2017 in June. But the India-Australia series turned bitter for Starc as he had to fly back home due to the injury.

The four-game Test series against the mighty Australia did spark a lot of controversies throughout wherein Australian media targeting Kohli topped the list. But regardless of the controversies from the series, this goof-up by Starc certainly has made things lighter. 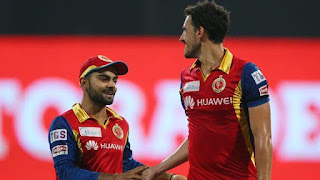 Contributed By: Amod Inamdar at 11:00 No comments:

Royal Challengers Bangalore #RCB, suffered a huge blow ahead of the 2017 Indian Premier League (#IPL) auction as Australia pacer #MitchellStarc will not be a part of this year's tournament.

A tweet from the IPL announced that Mitch and Bangalore had decided to "discontinue their association ahead of 2017 season", confirming reports in certain sections of the international media.

A statement from the Board of Control for Cricket in India explained that the player and RCB have mutually decided to discontinue their association ahead of the upcoming season of #VIVO #IPL Indian Premier League 2017 in accordance with Regulations of the IPL Player Regulations.

The 27-year old fast bowler, who missed the previous edition of the IPL due to injury, joined the Bangalore franchise in 2014 and has taken 34 wickets for his side till date 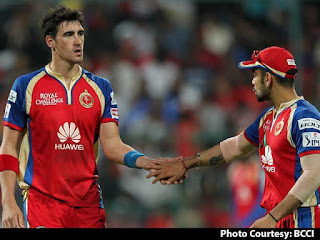 Powered by:
http://www.whowillwinthecup.com
Contributed By: Amod Inamdar at 15:27 No comments:

#ViratKohli, a.k.a. the poster boy of Indian cricket is on the charge ...

Needing a win to stay in touch with qualification for Qualifier1/Eliminator, the #RCB are trying their best to post a win here.

Their bowlers produced the goods earlier in the day, led once again by the man in supreme form - #MitchellStarc with a superb spell of 3 for 24 to restrict CSK to a 149 for 9 in 20 overs.

In reply, the RCB lost track early. #ABDevilliers and Mandeep Singh both departed at close interval to put them in a dock. But #Cheeku is fighting on gamely...

He has strung a good partnership with Dinesh Karthik and they seem to be rolling through at the moment.

Dont count the CSK out for one moment. That man #MSDhoni is capable of turning this around with some masterstroke or the other. Virat has also know to throw away games lately. So, its moving towards and exciting clash towards the end.... 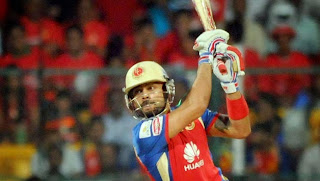 Contributed By: Amod Inamdar at 19:02 No comments:

This one comes from another cliff hanger at the Eden Park, Auckland.
The #CWC15 final clearly belonged to Australia and #MitchellStarc.
This game also belonged to them ... well almost!

Game started on a normal note, with Australia winning the toss and electing to bat. After a stormy start, Finch was bowled by Southee. Warner and Smith continued in similar vein before Kiwi skipper Brendon McCullum brought in the old Dan "the man" Vettori in to bowl.

His magic spell not just slowed down the run rate, but captured two crucial wickets of Warner (caught in the deep) and Smith (caught behind) to pull things back significantly for New Zealand.

Then began the "Lightining" Boult show.
He just came, saw and conquered the Aussies in an exhibition of awesome swing bowling claiming 5 wickets for almost nothing. For 78 for 1, Australia crumbled to 108 for 8.

Some late inning heroics by Brad Haddin ensured Australia closed their innings at 150 all out. Paltry score considering their batting lineup and start they received.

Cake walk, you'd think for New Zealand?
McCullum starts in own belligerent style but Australia strike exactly like the Kiwis and put them under a lot of pressure. At 135 for 7 and 146 for 8 and 9 (Mitchell Starc's extra ordinary death bowling spell) Australia look all set to upset the Kiwis.

Trent Boult survives a hattrick ball and its all come down to #KaneWilliamson to see how he can farm strike and chase the remaining 6 runs.

Pat Cummins the bowler, Williamson on strike, in-out field to save twos and boundaries. Williamson goes for it ... and bang ... six over long on does it.

Extraordinary scenes at Eden Park, Kiwis rejoice, Australia stunned but hold their head high. They made 150 look like Mt. Everest and almost pulled it off until Kane hit that winning shot.

Glorius moments from Eden!
Cricket, winner all the way...

Contributed By: Amod Inamdar at 23:08 No comments:

You DO NOT take Australia lightly. You cannot nail them all the way in both innings of a one day match. They will not lose their belief. They will fight hard until the last ball.

Well, New Zealand just found that out today in the biggest Pool A match here at Eden Park, Auckland.

Earlier in the day, the Kiwis had steamrolled the Aussies in an amazing burst of speed and spin bowling by #TrentBoult and #DanielVettori. Australia bundled out for 151. From 80 for 1, they slipped to 106 for 9 before #BradHaddin and #PatCummins hung around to take the score to something they could bowl at.

Boy, did they bowl well? and how well did #MitchellStarc bowl?
NZ kickstarted their batting with #MartinGuptill smashing 11 runs of the first legitimate ball of their run chase. A boundary off the hip off a no-ball. The proceeding #Freehit was dispateched over long on fence for a towering six. #MitchellJohnson, the hapless bowler.

#BrendonMcCullum continued in the same vein of form he has brought into this #CWC15 with a blistering 50 off 24 balls. His fall led to a mini collapse for the Kiwis triggered by #MitchellStarc.

Suddenly from 78 for 1, they were 79 for 4. Taylor and Elliot out off consecutive Starc deliveries.
#CoreyAnderson survived the hattrick ball but Australia sensed they could push through this Kiwi middle and lower order.

Anderson and #KaneWilliamson ensured there was no further damage and carried the score past 130 without too many hiccups. NZ victory in sight. 22 runs to win.

Just as everyone looked relaxed and yet another big-team game going down a one-sided path, drama began to unfold. This is where the Aussies are so proficient and their tenacity and ability to bounce back from hopeless situations comes to the fore.

A bowling change accounted for Corey. #GlennMaxwell got his man with his dibbly spinners.
131 for 5. Easy victory still in sight with Williamson settling down at the other end.

But, Starc had different ideas.

To begin with, he induced an edge from #LukeRochi
139 for 6

#PatCummins chipped in with the wicket of #Vettori shortly,
145 for 7

Things beginning to get uncomfortable for the Kiwis given their tail didnt have to bat much in this World Cup so far. In walked #AdamMilne to a crowded Australian field. They hustled up to the NZ batsmen knowing pressure was on.

Starc cashed in on that big time uprooting Milne's stumps for a blob.
146 for 8

The very next ball, #TimSouthee got a taste of his own medicine when his wickets were broken by a scorching Starc delivery for nought.
146 for 9

Can New Zealand lose this one now?
Had Australia completed their Houdini escape?

Starc steamed in for a second time in the game on a #hattrick, but Boult survived pretty comfortably. Huge roar from the crowd. Another ball to survive though.

#MichaelClarke made field changes for the last ball of Starc's over to avoid a boundary. Plan was set to trap Boult through a full ball but he sprayed the ball wide, a wasted delivery and chance to seal a famous win for Aus.

Over changed and so did NZ fortunes.
For starters, the well set Williamson was on strike but 5 runs was still an ask. He needed to farm the strike well. Pat Cummins the bowler. Field set inside out to avoid boundaries and doubles. Kane had a plan and Pat's inexperience at the death showed as he bowled a full length delivery. Williamson freed himself of the wickets, created room and smashed the bowl over the bowler's head straight down the ground for a SIX!

The Eden Park erupted, NZ batsmen ecstatic while Aussies disappointed. Amazing scenes.
NZ won by 1 wicket in hand and 161 balls to spare (just goes to show if Australia had scored another 15-20 runs more, the story could have been different)

Good game ... made extraordinary by Australia and their never-say-die spirit.
Take a bow! This is how you defend low scores. This is how you fight when the chips are down.
You may lose but you walk off head held high. This is the ultimate sports team!

Man of the Match: Trent Boult for his 5-For. If he had scored those 5 runs, am sure he'd have ranked them above the five wickets he took :)

Opens up Pool A beautifully now.
Things hotting up for the QF berths at the #CWC15. 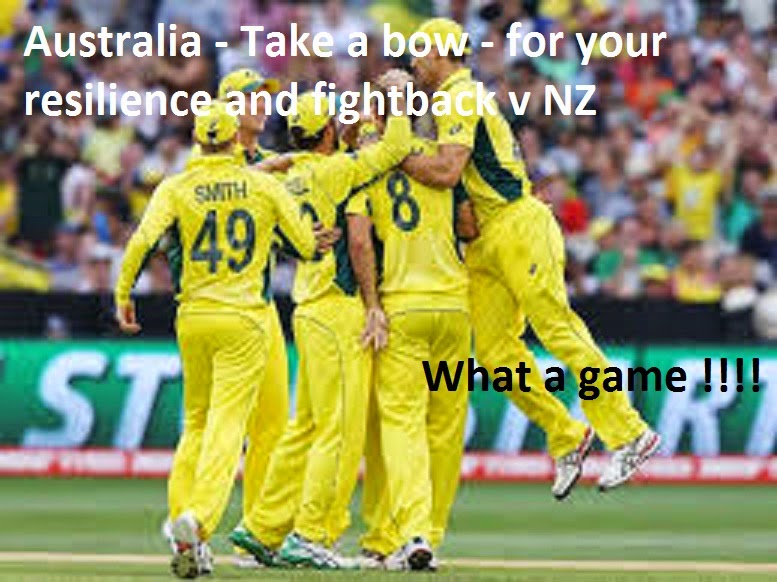 Contributed By: Amod Inamdar at 16:51 No comments:

The trio of three Mitchells - Starc, Johnson and Marsh run amok (claimed 9 of the 10 wickets to fall) at the MCG against a hapless and hopeless England batting order in their opening gam...e of the #CWC2015.

The only wicket to fall to other than a Mitch was #JamesAnderson run out at the end of their innings. #JamesTaylor played a valiant knock of 98 in vain. 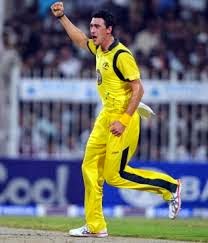 Bowling Stats:
Mitchell Starc 2 for 47
Mitchell Johnson 2 for 36
Mitchell Marsh 5 for 33
Run out - James Anderson
Man of the Match: #AaronFinch

Contributed By: Amod Inamdar at 17:08 No comments: