Champions of #India's Historic win against #Pakistan at #Adelaide #CWC 2015

#Shikhar Dhawan​ - set the foundation with a un-Dhawan like innings - risk free and lot of patience. My man of the match really.

#Virat Kohli​ - got back into form and took to the Pak bowlers with usual disdain and touch of arrogance. Did most of the two chances he got.

#MS Dhoni​ - marshalled his troops well in this crunch game and on back of a some poor cricket over last three months. Press, media and supporters, including me, were gunning for his throat. His personal form is still a worry but this CWC needs Dhoni more as India captain than batsman. 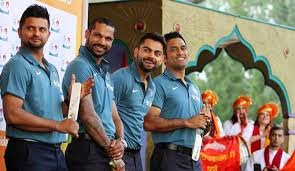 Powered by:
http://www.whowillwinthecup.com
Contributed By: Amod Inamdar at 23:32